GHCL Limited manufactures 60000 MTPA of refined Sodium Bicarbonate or baking soda, marketed under the Brand name – LION. Sodium bicarbonate, commonly known as baking soda, is a chemical compound with the formula NaHCO3. It is a salt composed of a sodium cation (Na+) and a bicarbonate anion (HCO3-). Sodium bicarbonate is a white solid that is crystalline, but often appears as a fine powder. GHCL’s sodium bicarb or SBC is available in the following 3 grades.

GHCL is one of the largest manufacturers of Sodium Bicarbonate in India and has clients across industries. GHCL’s sodium bicarbonate is purchased by hundreds of wholesalers, suppliers and companies through our distributor network across India.

For enquiries, call us or click the send enquiry button below and fill the quick form. 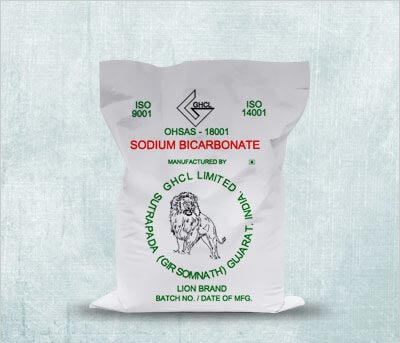